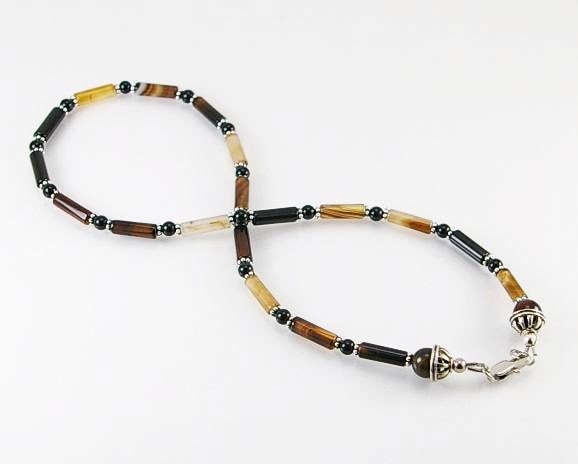 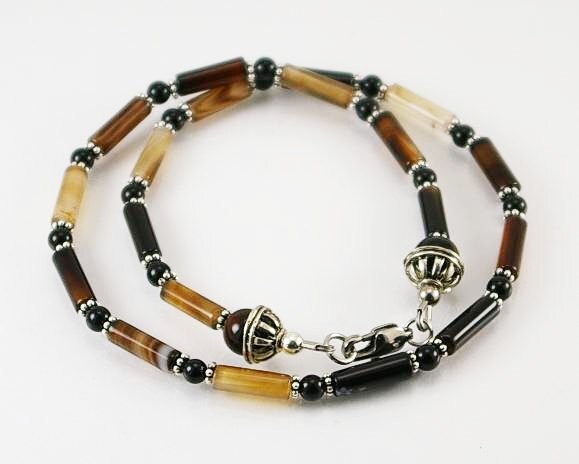 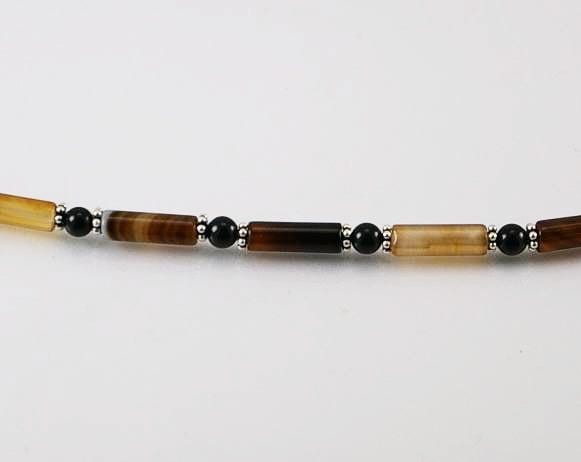 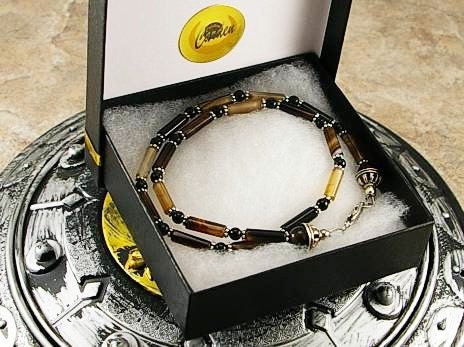 Agate is a stone of strength. It was used by the Ancients on the breastplates of armor to give warriors strength and make them victorious in battle. Energetically, it is considered to give strength in both battle and physically.

Agate enhances creativity and strengthens the intellect, making it a beneficial stone for both students and artists. It is also known as a good luck stone. As a stone of harmony, one of the things agate does is balance yin/yang energy. Agate increases energy. However, because it is a grounding stone, it does not increase energy at all times, but rather enables bursts of energy as needed. In this way, agate is a conservation stone, and enhances longevity.

Onyx is a form of chelcedony, which is a microcrystalline quartz. Black onyx is thought by some to have protective qualities, making it advantageous to carry when one is traveling. It is said to be useful in fighting basic fears and in helping to create the opportunity to move beyond bad relationship and to heal old emotional wounds. The Romans associated it with courage and it is thought to be useful when one is defending him/herself against unfair criticism.

Black onyx has been associated with regeneration and new beginnings. Black onyx is thougt by some to have protective qualities, making it advantageous to carry when one is traveling.

If you look for Zen or Cool style you get it!

I'll do my best to meet these shipping estimates, but can't guarantee them. Actual delivery time will depend on the shipping method you choose.

I gladly accept returns and exchanges

Ship items back to me within: 30 days of delivery

But please contact me if you have any problems with your order.

The following items can't be returned or exchanged

Because of the nature of these items, unless they arrive damaged or defective, I can't accept returns for:

All of necklace, chain and bracelet are mesure from tip to tip.


How to get your bracelet size

Step 1: Measure your wrist with measuring tape or piece of paper juste below the wrist bone, where you would wear your bracelet.

Step 2: If you are using paper, mark your size with a pen on it and the measure that paper strip with a ruler. That is your wrist size.

Step 3: To find your bracelet size, just add your wrist size to the sizes below depending on how you would like it to fit our wrist.

Comfortable fit: Add ¾” to 1” to your wrist size

All order comes with a full care instructions flyer.

All order is packed in bubble type enveloppe to insure good protection and jewelry comes in velvet pouch, gift box or jewelry box.

0 items in your cart